It's been a little while since I've had a chance to play Commander. Over the past three weeks I've had two such opportunities with some old friends. This, combined with some chatting with Mel Li on Twitter encouraged me to put digital pen to paper again. I wanted to write about my Grenzo, Dungeon Warden deck again but I had not had a chance to play it in either of the sessions. An aside: the deck was presorted, meaning I had meant to write about it at some point and just failed to do so. The deck I had the most success with (in other words I won the game) was my untested Ephara, God of the Polis deck.

One of my earliest Commander decks was Bruna, Light of Alabaster. It was a White-Blue deck that had a heavy graveyard component and was one I would take out when I really wanted to win. The problem I had with Bruna is that every game played out the same - I attacked with a giant angel and won. There's nothing wrong with this but after many years I just grew tired of always attacking with Bruna wearing Eldrazi Conscription (total flavor win though) so I put it on the shelf.

Fast forward to the Kaladesh prerelease. In my rather stacked pool (Cataclysmic and Noxious Gearhulk?) I opened Smuggler's Copter. After I collect my prize packs I start to think about how I can put that Crew 1 to good use and I recall one of my favorite quarter bin finds - Order of Whiteclay. I had the kernel of an idea and knew I wanted to replace my Azorius deck. I started planning what this deck would look like and had its general texture in mind yet I lacked a general.

I looked up the potential Legendary Creatures and scoured the list a few times. It took me a few perusals to finally see the potential synergy with Ephara. Once I did though, the texture added detail and I started to layer different elements into the deck. First would be the small reanimator theme with cards like Order of Whiteclay and Sun Titan. Second would come a "blink" theme. Working with these I started to notice my desire to do things on my opponents turn and that added a small element of Flash. While I only had one Vehicle in the deck I still enjoyed the idea of tapping and untapping as a cost, which led me to Knacksaw Clique and Collective Effort and eventually to Intruder Alarm.

The focus on smaller creatures led me to find some tribal synergies as well. Humans, Wizards, and Merfolk cards all make an appearance. The deck is a finicky machine that ends up drawing a ton of cards thanks to Ephara. The ability to reanimate on other turns with Order of Whiteclay or flicker Sun Titan with Deadeye Navigator (let's be real - how could I not run it?) makes it so I don't even miss Mulldrifter (which I for some reason forgot to include). One fun play I want to pull off with this deck is casting Rite of Replication with Kicker on Reflector Mage, because I'm not a nice person.

I played this in a three person game and never really fell behind. I was able to establish a board presence and the cards kept flowing thanks to Ephara. New Prahv Guildmage kept me alive long enough for Ephara to crack in for victory. I cast Collective Effort twice in the game and the card proved its worth. While this is not as hard a control deck as some other Ephara decks I've seen it served me well. 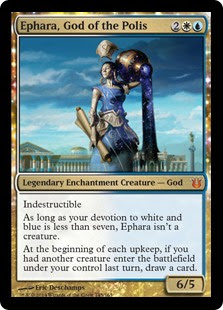 
I am a fan of playing decks full of cards with low individual threat profiles. A card like Restoration Specialist is hardly imposing but when combined with Attunement and Order of Whiteclay it has the ability to generate a massive amount of card advantage over the long game. The advantage of lowering the threat profile should be obvious - in a game of Commander the longer you survive the more likely you are to win. My Ephara deck only has a few obvious threats - Sun Titan, Deadeye Navigator, Draining Whelk - but the smaller creatures do a the heavy lifting. Now clearly sometimes this deck is going to be run over and that's okay! The goal, of course, is to have fun and sometimes you can do that by simply having a good game.

I have a number of decks that are built around trying to have a low threat profile. While Grenzo started that way I don't think that is the case anymore. When I acquired a copy of Grenzo, Dungeon Warden, I immediately thought about how I could cast it on turn two and start building value from flips. The focus on creatures with power less than two led me to include Shirei, Shizo's Caretaker as a way to get additional uses out of my smaller creatures.

The conceit of the deck started with Goblin Welder. The ability to flip the Welder into play and then get Artifacts back from the bin. It also gave me the opportunity to run tons of weird cards like Tel-Jilad Style, Junktroller, and Soldevi Digger. The focus on Artifacts gave me the opening to run Smokestack, which works exceedingly well with Pawn of Ulamog and later Marionette Master and Sly Requisitioner. Perhaps my favorite find for this deck is Stingmoogie which, when combined with the cards that can put cards on the bottom of my library, provides a recurring source of Artifact removal and the ability to remove pesky lands. 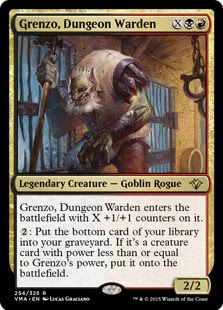 Enchantments
Goblin Bombardment
Pia's Revolution
Shadows of the Past


Unlike Ephara, Grenzo has some serious eye-brow raising threats. A card like Smokestack

can absolutely take over a game and Anathamancer never fails to draw ire. Gray Merchant of Asphodel is the way this deck wins most often thanks to Grenzo's ability to get it back consistently once assembled with a sacrifice outlet and a Junktroller effect. Kaladesh and Aether Revolt provided a lot of fun options for this deck like Pia's revolution, Scrap Trawler, the Gearhulks, and the aforementioned Marionette Master and Sly Requisitioner.

Not every game of Commander is won with the flashy play. Sometimes, you just need to build up a small advantage every turn. And leave your opponents helpless.
Posted by Alex at 2:43 PM