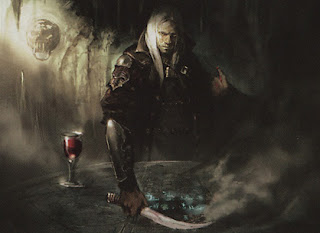 I thought long and hard about what to write about this week. The December 23 Pauper Challenge was dominated by Dimir Delver. This came on the heels of an article I wrote for ChannelFireball that questioned the place of Gush in the format. Needless to say the article generated a ton of comments in various different places. Even though you get told to never read the comments, I read every one. 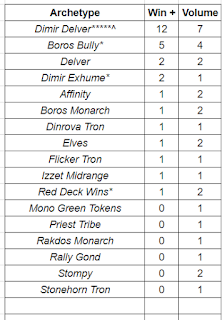 Before I go on I am going to say this: if you want people to keep creating Pauper content please treat them kindly. I have stopped posting in certain places simply because the legitimate criticism is buried behind personal insults. I'm sure some people reading this are going to think I'm being thin skinned.  That may be true, but look at where Pauper content creators are posting their work and where they've stopped.

After Hour of Devastation comes Ixalan. These charts all represent decks that had at least 2% of the Top 32 metagame volume. Again, Boros Monarch did exceptionally well in the short season but again there were two Top 10 Gush decks. To be fair there were two other Gush decks that performed below expectation.

Iconic Masters is where things started to turn. The four main Gush decks at the time - Delver, Izzet Blitz, Izzet Delver, and Tribe Combo - all over performed their expectations. The thing to note here is that the traditional Gush predators - Boros Monarch, Elves, and Stompy - are at the bottom of the chart.

Rivals of Ixalan season had three Gush decks in the Top 5 with Stompy performing over expectation as well. Even though Tribe Combo faltered a bit it still won a Challenge. Gush decks took up one-third of all over-performing decks that season, by far their best share to that time.

25th Anniversary Masters saw Izzet Blitz fall off the top of the charts and had Izzet Delver perform relatively poorly. Still in this short season, Gush decks won two of five challenges and had half of all Top 8 appearances. Boros Monarch surged to the top while Stompy and Elves both languished.

Reports of Izzet Delver's demise were unfounded during Dominaria season. The deck performed absurdly well, earning four Top 8s above expectation. Delver also had a great run, as did Elves and Stompy. Tribe Combo and Izzet Blitz both performed about as well as the should have, conforming rather nicely to a T8 delver of 0.

Over the summer, Core Set 2019 gave Pauper its best performing non-Gush deck with Elves. An out-sized portion of Top 8 appearances combined with a win. Despite Elves in the top slot and Boros Monarch performing exceptionally well, Delver - mono-blue Delver - had the second best season on the back of three challenge victories. Izzet and Dimir Delver both had solid spans as well, with Tribe and Blitz bringing up the rear.

And that brings us to Guilds of Ravnica. Dimir Delver had the best overall season and the third best Top 8 delta in my tracking. Tribe Combo had a good run as well and the new Gush sniper - Boros Bully - coming in third. Izzet Faeries burst on to the scene as another Gush deck and cannibalized some share from its Delver running cousin. Gush killers Stompy, Elves, and Monarch took a hit.

Now we can look at all of these results and see a few things. Gush decks have consistently done well. Even when these decks have fewer Top 8 appearances than their Win+ indicate, they still make the Top 8 often. Decks often cited as being good against Delver builds cycle in and out of vogue, often struggling to combat the latest top Gush build. For the better part of two years, a Gush deck has been either number one or number two.

There are some who say that Augur of Bolas should be banned. I can see the arguments there. However at the end of the day Augur's power isn't inherent to itself but rather a byproduct of the other powerful blue cards it can find. The advent of Augur of Bolas helped to supercharge Gush decks and much of its power is tied to finding Gush (and Ponder/Preordain/Brainstorm). I've seen arguments against Foil, saying that Gush was fine until Foil came along, but I like to think the above charts show something different.

I want to be wrong. I want a deck to rise up and prove that Gush can be allowed to stay. That a card so powerful as to be restricted in Vintage and banned in Legacy is just fine in Pauper.

Almost two years in and I'm still waiting.
Posted by Alex at 12:08 PM