And now for something completely different. The September 1st Pauper Challenge was won by a Jeskai deck featuring both Arcum's Astrolabe and Ephemerate. But Ethereal Armor had a breakout performance. 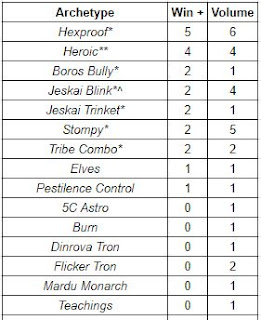 Last week (in a Patrons only post) I said that Ethereal Armor was the way to go moving forward. In an article that went live today I expanded on this notion. Namely, the proliferation of Arcum's Astrolabe decks makes the various Jeskai and Tron decks impossible to predict. While a macro strategy may be discernible, these decks could run any card they darn well please. So rather than trying to interact on a meaningful axis, the best way to attack them is to go as fast as possible and ignore their ability to interact with you. Both Heroic and Hexproof are able to do this, while piling on the damage thanks to Ethereal Armor and other force multipliers.
These decks did more than perform well, they pushed out most other linear decks. Burn put up one Top 32 finish while Affinity was nowhere to be found. The aggressive bend on September 1st also kneecapped Tron decks, as none appeared in the Top 16.
The winning Jeskai list seemed to be prepared for this eventuality. While it did not overload on removal main it did have a copy of Journey to Nowhere, which could have proved instrumental it taking out Lagonna-Band Trailblazers during the Swiss rounds. The winner also packed two Spellstutter Sprite main, and that faerie has been feasting on one drops for more than a decade. Finally, Cracudo packed two copies of Standard Bearer in the sideboard as a way to obfuscate the plan of Hexproof, Heroic, and Stompy.

So where does that leave the metagame moving into September 8th? Jeskai remains the dominant archetype and will surely adapt to the rise of these "go-tall" decks. The strategy must also adjust to meet the resurgent threat of Tribe Combo. If I were preparing for next week, I wouldn't leave home without access to Chainer's Edict and Pestilence.

But that's just me.

2019 is going to be a banner year for Pauper. I want to continue to be at the forefront of the metagame. If you like the work I do, please consider becoming a Patron. Thank you!
Posted by Alex at 5:01 PM