On November 3rd there were 6 Tron decks in the Pauper Challenge and four of them made Top 8. It was half the Top 4 and won the Challenge. The winning player went 7-0 in the Swiss and then clearly went 3-0 in the Top 8. That's impressive.

If you have followed me for any length of time you probably know I am not fan of the current iteration of Tron decks in Pauper. While the prospect of looping Dinrova Horror or Stonehorn Dignitary sounds cool, playing against it time after time can get tiresome - especially if you like attacking. Tron, in Pauper, is a prison deck that masquerades as a value build.

But is it a problem? 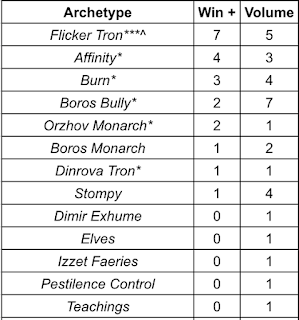 I am not convinced.

Look at the results of the Challenge. Out of all the decks you can argue that one of them is a traditionally bad matchup for Tron - Elves. While you can make the case for Affinity, Burn, and possible the Dimir Exhume deck, each of them have some problems, including a vulnerability to either Hydroblast or Pyroblast and their Alpha kin.

But every deck here attempts to attack the game on an axis that Tron excels at stopping. If some of these Stompy decks had instead been Red Deck Wins, it is possible a few Tron decks would have fallen. If the Izzet Faeries deck instead opted for an aggressive Delver of Secrets build, it's possible that one of these decks would have taken a hit. Four decks in a Top 8 is scary but only if it is consistent. And while this singular challenge may not be a harbinger of something worse, when we take a look at the three tournaments since Arcum's Astrolabe was banned we see something that should give pause.

This chart takes a look at the popularity of a given archetype (here Flicker Tron and Dinrova Tron are grouped) and compares its volume to the weight of its wins at X-2 or better. Through three events, Tron is crushing the field (although not as bad as some previous offenders). So the question then becomes what can be done? I would be looking at Bogles as a potential foil to Tron, while also investigating the prospect of Zombies as Shepherd of Rot can do some work in pressuring Tron without having to attack.

But that's my two cents - what are yours?

Pauper continues to grow in popularity and I want to continue to be at the forefront of the metagame. If you like the work I do, please consider becoming a Patron. Thank you!
Posted by Alex at 1:25 PM